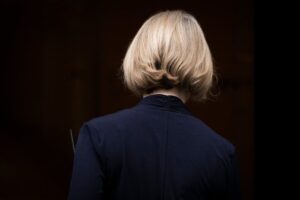 Liz Truss is out as Britain’s prime minister, ending a 44-day tenure punctuated by market turmoil and a humiliating U-turn on nearly all her major policies. The country’s news media had a field day with her departure, but the leadership vacuum created by her exit leaves real questions about what lies ahead for Britain’s economy and business community.

The U.K.’s already embattled economy needs government stability, fast. After initially improving on the Truss news, the pound and British government bond yields gave up their gains. Markets are already wary of what the next prime minister — who would be its third this year (potentially; more on that below) — will put forth, though it’s unlikely that person would propose anything like Truss’s highly unpopular and unfunded tax cuts.

Who will replace Truss? The ruling Conservative Party is planning a lightning-fast process of picking a new leader, with the goal of having someone in place within a week. Potential candidates include Rishi Sunak, the former chancellor who lost to Truss last time; Penny Mordaunt, who came in third; and former Prime Minister Boris Johnson, who resigned this summer under pressure from lawmakers.

There are other potential causes for concern. Cybersecurity experts are worried that an online component of the selection process could be vulnerable to hacking. And some political commentators worry that picking yet another prime minister without a general election would result in a leader without a true political mandate.

Businesses have had enough of the chaos. “We don’t need more Cirque du Soleil,” said the chief of BusinessLDN, a trade group. What the corporate community is now hoping for, a senior executive at a big multinational told DealBook, is stability and moderation.

Whoever becomes prime minister is unlikely to go beyond the cautious approach of tax increases and spending cuts that Jeremy Hunt, who has been chancellor of the Exchequer for a week, has promised. Going beyond that risks inviting another backlash from the markets, this person predicted: “It’ll be about getting the economy under control and getting spending down.”

An aside: The Economist’s latest lead editorial, comparing Britain’s economic straits to Italy’s, generated no small amount of derision — particularly from Italians — over both the facts and the cover art.
Image
HERE’S WHAT’S HAPPENING

Instacart delays its I.P.O. plans. Worries about jittery markets prompted the food delivery company to push back its timeline for going public, The Times reports. The company had planned to publicly disclose its financial data, a key step to a public offering, this week.

Courts block challenges to President Biden’s student debt relief plans. A federal judge in Missouri rejected a lawsuit by six Republican-led states, while Justice Amy Coney Barrett of the Supreme Court turned back one by a Wisconsin taxpayers’ association. Both suits were likely dismissed on technical grounds, rather than on the merits of their arguments; other lawsuits are still pending.